But The Earth Grew A Spine

Black (Right Eye Orange If Using His Equivalent To Sans' Bad Time Eye - Phase 1 And 2, And Specifically In Phase 3, It Occasionally Flickers Between Orange And Light Blue)

Papyrus no longer believes in you.

After you, (the protagonist), repeatedly play through a Genocide Route, Sans gets sick of watching Papyrus, and his friends turn to dust and die, so he finally decides to interfere. He stops Papyrus from fighting you in Snowdin, and tries to fight you himself, but dies, leaving Papyrus to watch all of his friends die with his own eyes.

Instead of meeting Sans in the Last Corridor, you meet Papyrus, and the events from this time on lead up to his fight with you.

At this point, Papyrus has lost all the belief and faith that he had that humans could be good, and is now out to get revenge for the death of his brother, and friends.

This is the idea behind Disbelief Papyrus.

Disbelief Papyrus is wearing Sans' jacket, and his right eye glows orange in Phase 1, 2, and 3; a concept similar to Sans' Bad Time Eye. Specifically in Phase 3, his equivalent to Sans' Bad Time Eye occasionally flickers between orange and light blue. Primarily in Phase 1, he is crying, but there are other times in the fight that he cries. His battle body in Phase 2 appears to be slightly damaged, or at the very least, scratched, while in Phase 3 and 4, it is severely damaged. Overall though, his appearance is the same as the regular Papyrus'. He is wielding a bone about as long as he is tall in Phase 1, and the same bone broken into two halves in Phase 2.

During his Pre-Battle, he explains different things that he is feeling.

His thoughts and feelings rapidly fluctuate throughout the fight, from him still thinking that you can change until moments before death, to him truly trying to kill you.

For the music playing in all of the different phases, click on this link: https://www.youtube.com/watch?v=gpjzRrLBAp8 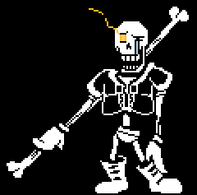 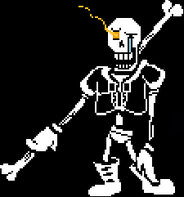